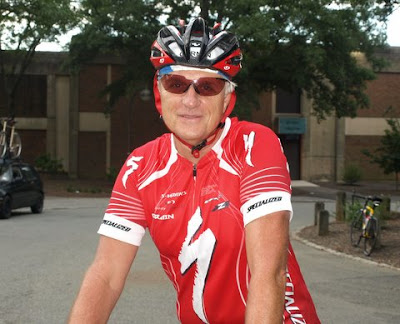 On Friday we lost one of our strongest, steadiest, funniest, most cynical, and most sarcastic riders to a freak accident that should happen to nobody, the least of all Joe McBride.

There's a hole where he used to be, and the best we can do is fill it with memories.

He was fond of long rides and steady riders, less so of big hills and squirrely cyclists.

He was the Big half of the Joes.

He gave me his old De Rosa jerseys.

He brought me gummy lobsters from Cape Cod. Twice.

He taught me how to ride flat centuries.

He loved going to Belmar and riding along the Delaware River.

He was a good listener.

He was smart and insightful.

He had certain gestures. 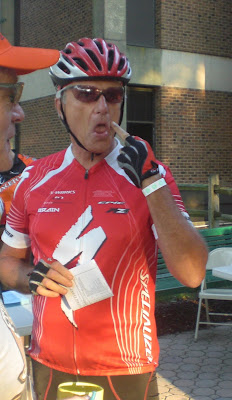 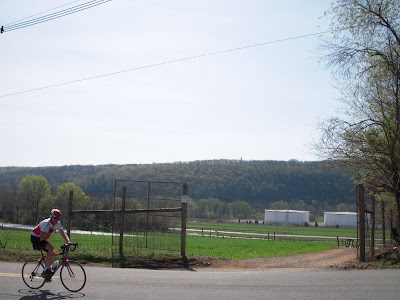 click on the picture and you'll see
He had certain phrases:

"JESUSsaves!" whenever we passed a church.

He called Cheryl "the Hub of the Club."

When Mike M pulled us for miles and miles, he called him "Mighty Mike," and it stuck.

Under all that rough exterior was a man dedicated to the sanity of others. He could spot a person in trouble from a mile away.

He showed up in my blog time and time again:

Joe knows Drew and Murdo; I figure this out because he’s cursing at them already. (4/27/08)

Cheryl was talking about her family, about her being one of a large handful of kids. Big Joe asked, “Are you the youngest?” “Yep. I’m the baby.” “I could tell.” “Fuck you!” Oof! She got him! The first “fuck you” of the day and rather than coming from Joe it hit him smack-dab in his dignity. He grumbled about it for the rest of the morning. (7/11/08)

We weren't much further along, but at least we were on a shady road, when his tire went "Pfffftttt!" again. More F-bombs, and someone wondered if he'd gone over his F-bomb quota. He pulled out a boot -- a four-inch long section of old tire -- and placed it between the gash and a new inner tube, courtesy of Little Joe. Tom said, "You get one more time, Joe, then we're leaving you." I said, "I thought our love for Joe was unconditional." Jack H. looked at me, paused, and said, "Heat getting to you?" (7/24/10)

After reading my blog, Big Joe declared that I'm a bigger wise-ass than he is. I didn't think that was possible. Takes one to know one, Joe. (8/10/08)

We miss you already. 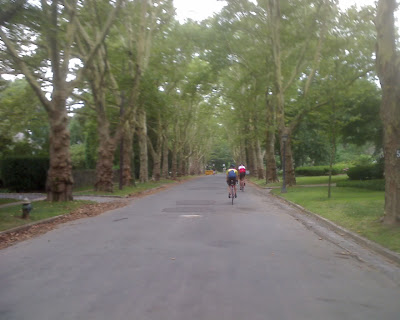 Posted by Our Lady of Perpetual Headwinds at 5:37 PM

Laura, a nice remberance for a great man. RIP Joe.

The best part of cycling is the wonderful people with whom we do it.
The worst is losing them.

I only knew Big Joe from your blog, but I miss him. I will think of him on the flats and whenever I hear the F-bomb.

He said he didn't like to work when riding, but he did. He listened, and helped, often.
You knew where he stood about pretty much everything in less than 3 minutes.
If he liked you, you were a part of his special group. If he didn't like you, then you knew that too. In a world filled with pretense and posturing, that is a rarity.
For more than 20 years he counseled the families of the Lockerbie Scotland terrorist attack, for free. When they honored him for that service, it was among the proudest moments of his life.
He loved his family dearly.
He said as a child he was groomed to be a priest. Atheism aside, I told him in many ways he was one.

Dear all,
It always hurts to hear of the loss of one of the cycling family, especially on the bike. Thoughts and prayers to all who feel his loss.

It doesn't seem possible that anything could happen to a larger than life character like Joe McBride. His special rides to Belmar with Mighty Mike were the rides you looked forward to all year. You never came away from a ride with him without a story to tell. We were already telling Joe stories today at his Memorial Service. Nothing motivated Joe to ride fast like lightening. On one ride back from Belmar, a few claps of lightening hit and Joe took off like he was in the Tour de France, leaving the entire ride stuck at a light. I didn't think Joe could even ride that fast. By the time Erin rode him down, we had reached Etra Park. He was also a true humanitarian. His commitment to raising funds to cure Diabetes was second to none. And this year, he finally got that Red Rider shirt he had been coveting for years. Joe, thought it was made a little chinzier then previous years, but I was told that he eventually wore it, after all, it was RED. I am grateful that I will have the memories of the many PFW, Belmar, and Tour de Cure rides that I went on with him. He will be greatly missed.

The first time I met Joe was on one of my first PFW rides about five years ago. I hardly knew anyone. All of a sudden there were F-you’s flying between this man and this women. I didn’t know what I had gotten myself into and thought that these guys must really hate each other. It soon became apparent that it was in jest and I later learned that Joe and Cheryl really were good friends.

As I got to know Joe, one of the things that became clear was the breadth and depth of his long-term friendships. This was a reflection on his character. We are all going to miss him.

Although I haven’t been able to ride much over the last several months, I’m really glad that I was able to get out with Joe for a random ride a couple of weeks ago. The conversation and stories touched on so many topics…politics, baseball (the Yankees had lost), bikes and biking (of course), mental health and relationships, family and friends, work and vacations. Laura, I want you to know that you came up in the conversation. There were no F-bombs and Joe had only kind things to say about you and your rides.

Lovely blog, thank you for the kind memories of joe. He was a great man and loved to ride, as you know.