Sean's Got Another One

This is why we ride.

Posted by Our Lady of Perpetual Headwinds at 8:28 PM 4 comments: 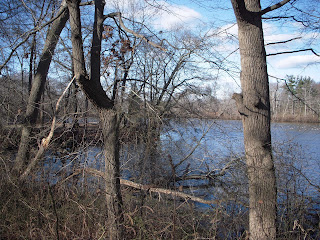 I've started riding in Cranbury again.  It'd been a year, which is far too long to go without teasing Larry about rest stops at Le Chateau de Ptomaine.

December 4 was my second day back on the bike after two weeks away from it.  We had a good group.  In Allentown we stopped to collect everyone.  Larry, for some reason, was taken by a store's sign and wondered why I wasn't pulling out my camera.

"Fuck you, Goldsmith," I said, and took a couple of pictures. 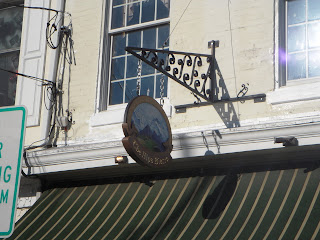 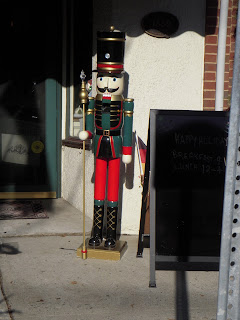 The haze clears away this time of year.  Sunlight is white in the mid-morning.  If the air smells like anything at all, it's burning firewood.  I stopped for a magestic tree along of one of the two roads that cut through the Assunpink Wildlife Management Area.  Up ahead, Plain Jim, the sweep, waited patiently.  I didn't see him there until I looked at the pictures at home.  The pop-up sun visor on the camera long ago fell apart in several places; in bright light I can't see what I'm doing anymore.  I was just grateful that the battery door stayed closed. 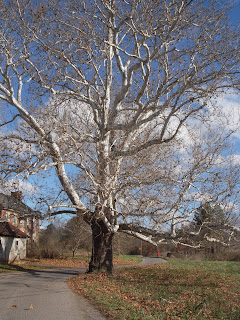 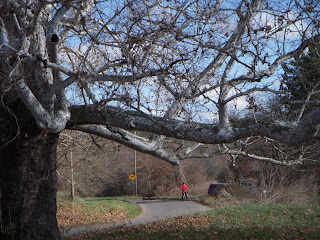 So, Larry, these are for you.

We've taken Sean into the hills a couple of times.  I'd been talking up the flatlands to him.  On Christmas Eve I didn't have a ride in the book, but I put out a call for a flat ride.  Tom suggested New Egypt; he'd read my mind.  We wound up with eleven people.  I should not be in the book more often.

Part of the attraction, I think, was that I promised I'd be wearing antlers.  That got Ron to say yes, anyway.  Cheryl said she'd bring hers.  I got to the park early enough to help her put them on.  When I rolled in, Mike M was trying valiantly to attach them.  I took over and managed to secure them in no time.  Backwards, it turns out, but none of us noticed until well into the ride.

Sean hammered in at some record-breaking speed, accompanied by a text message from Dale that he was on his way.  "We're waiting for Tom and Herb," I told him.

Those two were running late, after having to fix a flat.  Mary (rockin' the new PT Assistant degree and position) and Steve K (where has he been?) were there too.

Plain Jim was struggling with a knit cap that we eventually fitted over his helmet.  Chris had one of his many not-black leggings on.  "I need a picture," Steve said.  "Take one for me too?" I asked him. 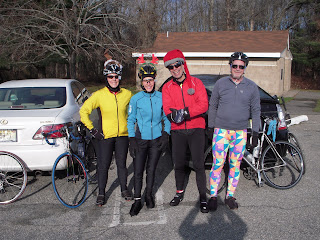 Two reindeer, a skinny Santa, and an over-sized elf.  We're ready to ride.   I need a new set of antlers.  The left one keeps falling down.

The plan was to grab a snack at Scott's.  There's a  parking lot that separates the general store from Max's, a new-ish bike shop, and the bike shop has a bike rack.  As we were settling in, a woman from Max's popped her head out of the door and said, "I've got free coffee and water here!"

Most of us went inside.  Quite a spread:  Christmas candy, homemade eggnog bread, and a blasted Keurig single-serve coffee machine.  I refuse on environmental grounds ever to drink from a K-cup.  I went across to Scott's instead.

Tom and Herb wanted to get a move on.  I had a bit of a tough time prying people out of the store.  Sean hung a candy cane from his saddle bag.

Tom was leading.  On our way south we'd had the opportunity to show Sean the biggest Jersey Berm around:  the one behind the Arsenic Mall (a.k.a. Hamilton Marketplace).  We went through the rural part of Hamilton, too, the section that a hearty group of souls is working to preserve.

We took Sean up Hill Road, too.  On the way back, we passed by the Matrix warehouse complex and its "preserved woodlands -- do not mow" Jersey Berm.  When we turned onto Gordon Road, dead-on into the wind, Sean said he missed the berm.  He pondered it some more and decided that perhaps he should go into the berm business.  "Berms R Us," he suggested.  I said that NJ's builder's lobby would love him for it.

Sean had his helmet camera on again. He's produced a three-minute video of our trip.

Now I want a helmet camera too.

The little bells on my antlers were just about driving me nuts by the time we were nearly finished the ride.  I kept them on, though, all the way home.  They're in the bedroom closet now.  By the sound of it, I think the kittens have found them.

Speaking of kittens, they've denuded our Christmas tree's lower half of ornaments (we went with plastic with this very possibility in mind).  I've decided against re-hanging any that I've found on the floor or bobbing in the tree's water.  I'm not sure I've found all that have fallen, but, so far, the little guys have made themselves an impressive collection of shiny toys: 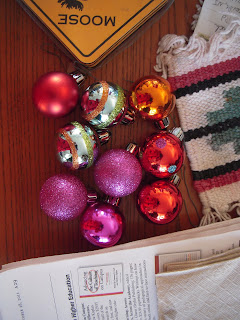 Here's Moxie, up on his perch, contemplating ornaments in the upper reaches.  See that red one just above his shoulder?  He was going for that one this morning. 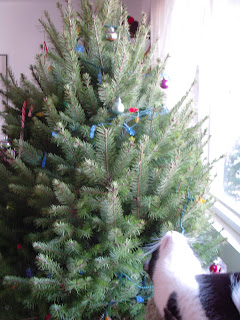 So, anyway, there's this thrice-weekly morning ride in the flatlands that's been called the "Old Guys Ride."  Cheryl has said, "Don't let 'em fool ya.  They're fast."  Plain Jim concurs.  Being a nine-to-five (in theory) grunt, I've never made it out to this ride.  But its popularity has grown so much that there are sometimes twenty people out there.

Yesterday I finally had the chance to try it out.  It was my fourth day in a row having exercised.  I was deliberately un-caffeinated, because drying out a few days each week guarantees that I'll never build up too much of  a tolerance.  The wind was out of the northwest at sixteen miles per hour, minimum.  As I drove over, I knew I'd be in for a tough time.

And a tough time I had.  Fifteen of us (four Hill Slugs -- me, Cheryl, Joe, and Ron) let the tailwind push us to Jackson.  I was already feeling every pedal stroke.  Heading home, I'm usually one of the stronger ones because I'm built for endurance, not for speed.  Not this time.  I couldn't hold a pull for three minutes.  I couldn't even close the gap with three riders in front of me.  I was stomping in my big ring when I ought to have been spinning in the small one, all of my energy focused on keeping my back straight instead of hunching down into the headwind.

Just north of the Chateau, I said to Joe and Cheryl, slowing so I could ride beside them, "I get it now.  This ride is a C+ on the way out and a B on the way back."  Joe said something and took the lead, latching onto the group I'd just fallen from.  We were on a tiny hill.  I couldn't close the gap.  The group pulled away, Joe with them.

When I'm tired, the first thing to go is my posture.  Now that I'm one of those people with a bad back, I do everything I can to keep it from getting cranky.  If that means slowing down, so be it.  I'd rather battle the wind on my own and still be able to tie my shoes.

I watched the lead group for the rest of the ride, never too distant, but too far away to chase.  It was perfect.  I deserved to be dropped by Joe for at least as many miles as I'd dropped him in September.  He didn't mean to drop us today; I didn't mean to drop him then.  But this was beautiful and perfect anyway.  Cheryl and I plodded along on our own almost all the way back to Etra Park.  Two people caught us from behind then and shared the pull for the last few miles.  I jumped out in front for the last of it; I wanted to burn my legs out, and I did.

Off my bike and next to Joe, I said, "You need to drop me more often.  It makes me work harder."  He said, "I was just barely hanging on."  To Cheryl, I said, "If you talk to Andy before tomorrow, tell him I'll be in class in spirit, but my legs won't."

I did go to Andy's spin class this morning.  Just my luck it was a strength class, for which he had us climbing an increasingly steep hill for forty minutes.  My heart rate was ten to twenty beats below where it ought to have been. 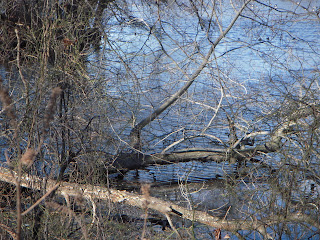 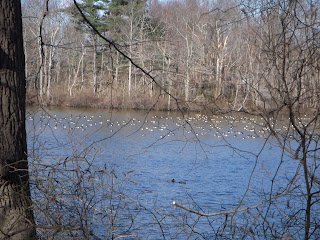 Posted by Our Lady of Perpetual Headwinds at 1:20 PM No comments:

If you're interested in a 40-ish-mile ride from Mercer County Park to New Egypt and back, meet at the East Picnic Area of Mercer County Park at 10:00 a.m. on Saturday, 24 December.  Antlers are welcome; pace-pushers are not.
Posted by Our Lady of Perpetual Headwinds at 3:04 PM 3 comments:

Anyone out there wanna do a ride on Saturday?  Maybe the flatlands for a change?  Gimme a shout if you're interested.  My email address is in the book, or you can comment here.  If it's a go I'll post something tomorrow.
Posted by Our Lady of Perpetual Headwinds at 12:04 PM No comments:

Last Saturday I got a small group together for a late-morning ride.  The goal was to show Sean that there are better places than Cherry Valley and the Great Road to explore if one is going to play around the Sourland Mountain.  The pressure was on to show him some challenging climbs and decent descents.  That meant Poor Farm, of course, and Harbourton-Woodsville.  Despite an oil-and-chip washout that made the downhill more interesting than fun, Sean had his helmet camera on.  He was filming again when we sent him all the way down Rileyville.

What he did with the recording makes us look seriously bad-ass.  Take a look:  http://contour.com/stories/more-roads-for-sean--2
Posted by Our Lady of Perpetual Headwinds at 9:23 AM No comments:

Cheryl tells me that she heard, second-hand, that the Lambertville Baker's Treat will be closing.  I know we went there last time I led, but let's go again, with big pockets (*), so we can support the store (all proceeds go to charity) while it's still there.

Meet at the Hopewell YMCA/Administration Building parking lot on Main Street, across from Ingleside Road, in Pennington.

(*Eat something there, take something home.  It all looks so good.)
Posted by Our Lady of Perpetual Headwinds at 8:10 AM 1 comment:

Saturday's ride will be short and sweet.  Well, short for a Hill Slug, anyhow.  In 35-40 miles we'll wind our way to Lambertville for some sugar and caffeine.  Meet at the Hopewell Administration Building/YMCA parking lot on Main Street, across from Ingleside Road, in Pennington, at 9:00 a.m.

Extra-milers can meet me at my house at 8:30 a.m.
Posted by Our Lady of Perpetual Headwinds at 6:39 AM 3 comments: