Pictures from the Charity Ride for Joe McBride 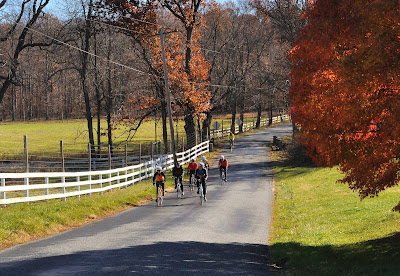 Thank you, all of you, who contributed and came out to last week's Charity Ride for Joe McBride. So far we've raised around $1400 and the checks are still coming in.

Thanks go to Ira Saltiel for leading a group up the river to Frenchtown and back, like Joe used to do, and to Bill Cooper and John Smolenyak for helping me lead the rest of the crowd up the ridge and down to Upper Black Eddy in a version of one of Joe's other favorite routes.

Kudos to Dale and Sean Ireland, who were our California contingent, holding a west coast version of the ride.

I was too busy corralling twenty riders to take pictures, but Glenn Cantor and John Smolenyak stepped up. Below are some of the images they sent me.

Glenn took this group photo before we headed out: 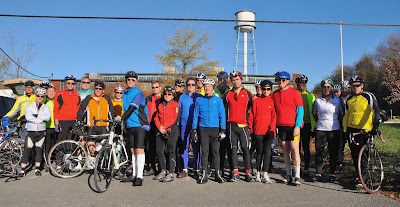 Here we are milling about as people sign in (Glenn): 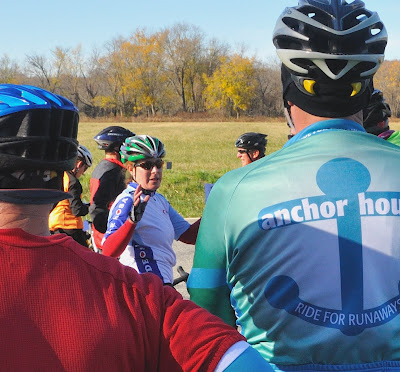 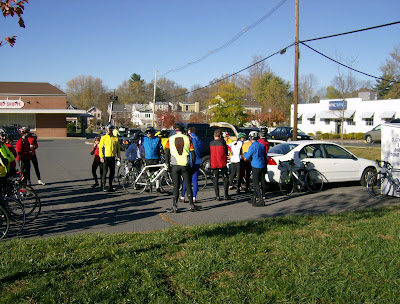 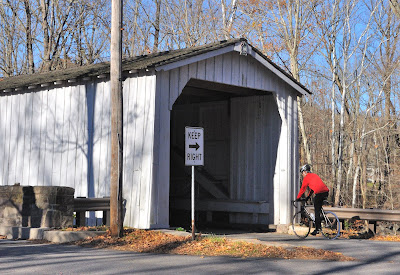 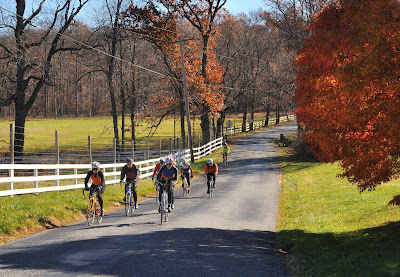 Our rest stop was at the Homestead General Store in Upper Black Eddy, PA. The store is just across the river from Milford, NJ, where Joe liked to stop at the deli. I guess it was earlier this year, or late last year, when I convinced him to follow me across the river for a better rest stop. He resisted at first, but I managed to get him to agree to it, just this once, to try it. When we got to the store, he was amazed. "Why didn't you tell me about this place?" he demanded.

John took this picture of us behind the general store: 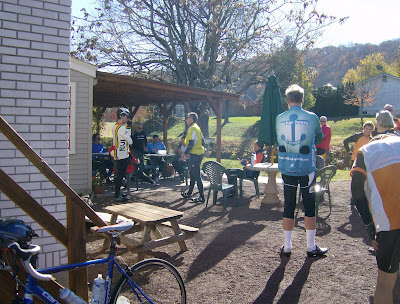 Homestead roasts their own coffee beans. Regular readers of this blog will remember that I'm fond of buying a bag and stuffing it into my jersey pocket for the ride home. John, having heard me rave about the coffee here, crammed a bag into his backpack. Cheryl, though, had no pockets, and, with my prodding, got creative about her storage options (Glenn): 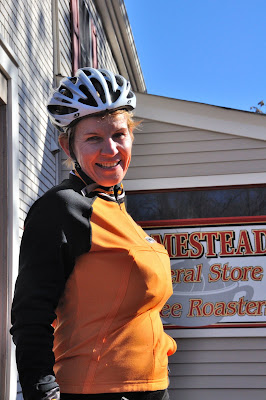 I made her remove her falsies for the ride home, though. She handed her boobs over to Chris, who had a handlebar pack big enough to hold them.

Glenn took a picture of this maple tree. Everywhere the maples were yellow. It reminded me of a Thanksgiving ride that Cheryl, Joe, and I did a few years ago. We wound up in the Quakerbridge Mall parking lot, just because it was there and empty. Yellow maple leaves were all over the ground that day. Cheryl took a picture of me and Joe, in matching DeRosa jerseys, in his driveway. Ever since that day, whenever I see yellow maple leaves, I think of that ride. 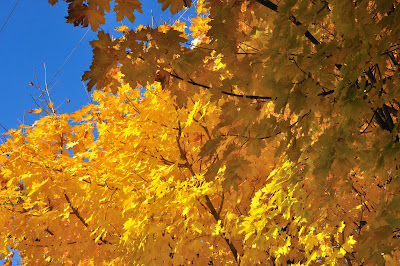 Glenn got this excellent shot of us walking our bikes back across the bridge to Milford: 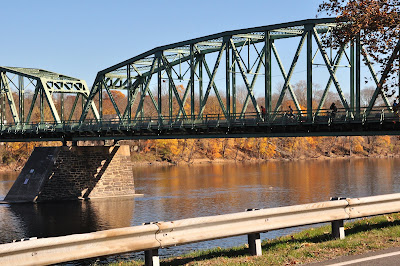 While we were stuffing our faces and our jerseys, Dale and Sean were getting ready for their ride. Dale sent me this as I was finishing my coffee: 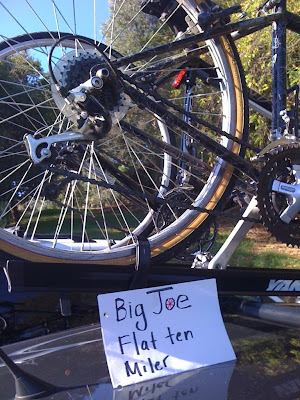 Sean reports the following conversation from their ride, fully capturing the spirit of our departed friend:

Dale: How come my handlebars feel further to reach since the last time I rode?

Sean: You've aged and shrunk into an old lady since then.

Posted by Our Lady of Perpetual Headwinds at 9:44 PM

The tears are now streaming down my face.

And, smiles too, of you wonderful folks I have had the pleasure of riding with in the past.

I did not know Joe very well but enjoyed the rides I did with him when Laura or Cheryl led the rides.

How wonderful to see you all out there, supporting your friend, and with such wonderful contributions and glowing grins!!

What an honor to Joe and to all of us who have had the joy of riding with you as our trusted leaders at some point along the way. It is why you are, indeed, LEADERS!

I want to frame the comments and photo of Cheryl.